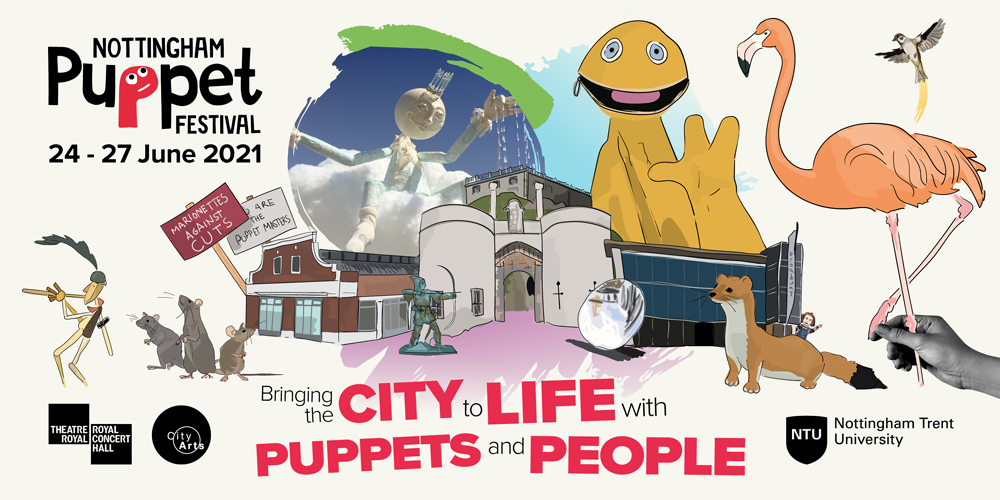 Working in partnership, the Theatre Royal & Royal Concert Hall, City Arts Nottingham and Nottingham Trent University, are excited to announce new dates for the Nottingham Puppet Festival which will take place this summer.

From Thursday 24 to Sunday 27 June, locations around the city centre will come alive with a vibrant and fun programme of puppetry. From spellbinding adventures and storytelling, to curious creatures and creations, there’ll be shows, screenings, workshops and walkabouts to entertain the entire family!

The full festival line up and ticket booking can be found at www.nottinghampuppetfestival.co.uk

Join Maid Marionette and a whole host of rebellious puppets, including the YOUnique Collective from New Art Exchange, on Saturday as they weave their way around the grounds of Nottingham Castle, lending a touch of magic and carnival flavour to the newly reopened castle and grounds. Then head to Sneinton Market on Sunday for a choice of family shows followed by puppets in the plaza including the fabulous flamingos!

Also, on Saturday, Nottingham based Ditto Theatre will be blasting into space from outside Nottingham Playhouse with ‘Rocket Girl’, a walkabout puppet treat, based on their award-winning show, where you will discover if you have what it takes to be an astronaut.

Elsewhere in the city, Norwich Puppet Theatre’s Pied Piper will be dancing into the Squire Performing Arts Centre for a special performance, as well as exhibitions at City Arts, and daily online puppet poetry.

Following the success of Nottingham Trent University’s puppetry talks series at the last festival, they’ll once again celebrate puppetry with talks and debates from local up-and-coming, as well as established, creators and makers, the talks will take place earlier in June and then be screened as part of the festival.

“The shows will be smaller, and masks will be on, but we hope this festival will bring some sparkle to the city after such a difficult year.” Alison Denholm, City Arts Creative Development Manager.

Broadway will be hosting an illustrated talk from leading marionettist Ronnie Le Drew, best known for his years as Zippy from TV’s Rainbow, and work on Labyrinth, The Muppets Christmas Carol, and more recently his work on Netflix’s The Dark Crystal: Age of Resistance. This will be followed by a screening of the classic fantasy Labyrinth as well as a late-night screening of 80s classic puppet horror Child’s Play.

In order to keep everyone (including the puppets!) safe the organisers will be maintaining Covid rules throughout, including  social distancing, masks where necessary, with many performances or events limited in number and with a timed booking system.  Tickets will need to be booked online in advance for all performances, except at the castle where a General Castle Admission ticket will need to be purchased. This will allow access to all of the Nottingham Puppet Festival programme in the Castle grounds.

Nottingham Puppet Festival is grateful for the financial support from Arts Council England, the Foyle Foundation and Nottingham City of Literature, as well as the support from our many festival partners across the city.

For the full festival line up and ticket booking visit www.nottinghampuppetfestival.co.uk