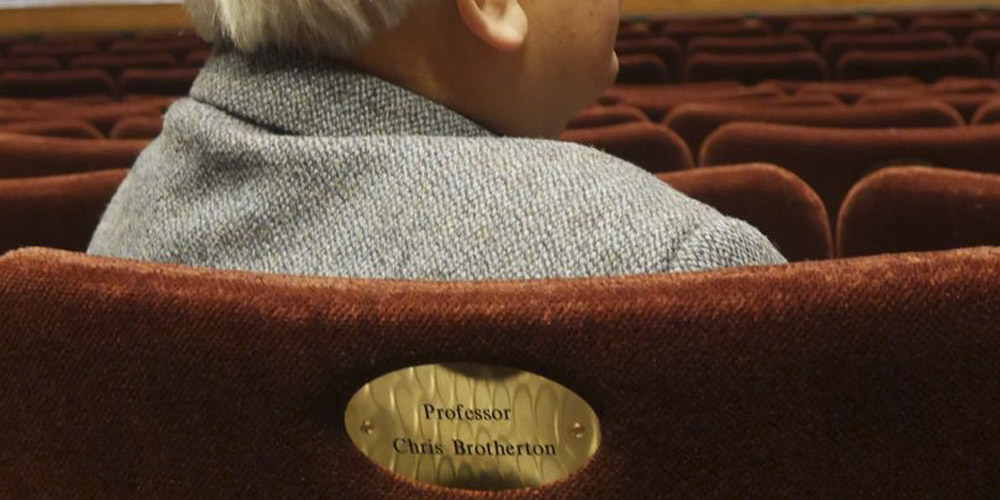 Former Labour councillor, Professor Chris Brotherton, has added his name to a seat in the Royal Concert Hall, a venue he played an instrumental part in planning and financing back in the late 1970s and early 1980s.

The Royal Concert Hall is a subject still very close to his heart.  When he came to the venue to see his newly installed seat plaque, he said: “The Concert Hall is very special to me and I am very proud of it.  In 1979, at the first meeting of the Labour Group, John Carroll welcomed us all and then said, ‘We’ve got lots of things to do, but the highest priority is the building of the Concert Hall’.”

The planning process was straightforward but he did recall some strange objections: “I remember Nottingham Polytechnic, now Nottingham Trent University, objecting to the size of the building saying it would overshadow their main building.  When we looked at the measurements they’d worked it out in metres instead of millimetres – it would have been bigger than the Empire State!”

“I was here for the opening concert in 1982, and I still come to the Nottingham Classics international concert season.  I book the whole series in one go and I love the concerts I have been to.  The acoustics are just perfect.  It was one of the first halls to be built on acoustic principles; it was built with music in mind.”

“I am very proud of the Concert Hall and to add my name to a seat in the stalls.”

As a Name a Seat donor, Professor Brotherton has a brass plaque bearing his name affixed to seat L19 in the stalls of the Royal Concert Hall for the next 25 years.  He came to see his plaque in situ and receive a personalised certificate with his daughter, Claire Brotherton, on Monday 13 November.

Donations to the Theatre Royal & Royal Concert Hall’s Name a Seat scheme ensure that the venue continues to play and exciting role for future Nottingham generations.  To find out more, please visit www.trch.co.uk/nameaseat