RSC to tour 3 productions in repertoire for the first time 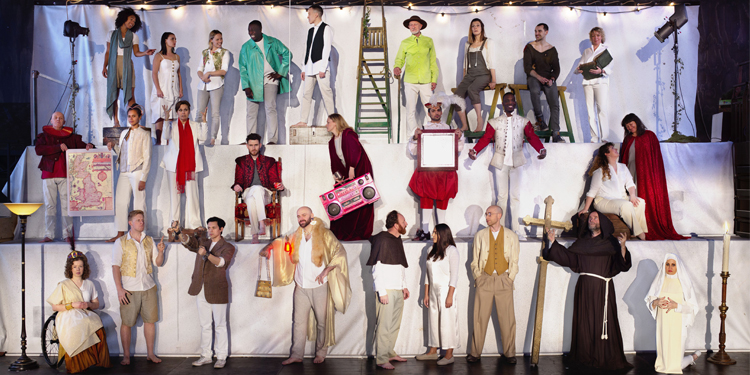 For the first time the Royal Shakespeare Company will tour three productions in repertoire to six regional theatres, playing for two weeks in each venue.  As You Like It, The Taming of the Shrew and Measure for Measure will visit Nottingham in March 2020.

The productions originally open in the Royal Shakespeare Theatre in Stratford-upon-Avon, running between February and August 2019.

The company will feature 27 actors, who will each appear in two of the three productions.  As You Like It is directed by Kimberley Sykes, The Taming of the Shrew by Justin Audibert, and Measure for Measure by RSC Artistic Director, Gregory Doran.  Set design for all three productions is by Stephen Brimson Lewis, Director of Design for the RSC.

Gregory Doran, RSC Artistic Director, said: “We have worked hard to assemble a company of actors which reflects the nation in ways it has never done before. Featuring a 50/50 gender balanced ensemble, we have brought together talent from all corners of the United Kingdom, reflecting both the ethnic, geographical and cultural diversity of Britain today and those artists that are underrepresented on our stages. We want to create a season of work which places contemporary audiences at its heart, which speaks directly to the present moment.”

Erica Whyman, RSC Deputy Artistic Director, added: “We want as many people as possible to see our work, and we really believe Shakespeare should be for everyone, so taking plays around our nation is an essential part of what we do. I’m delighted that this new tour will give audiences the chance to see not just one production, but our wonderful company of actors in three very different plays.  My Romeo and Juliet is currently making its way around the UK, as is our award-winning Matilda The Musical, and later this year we will take our First Encounters with Shakespeare production of The Merchant of Venice into regional theatres and schools, ensuring we are a truly national theatre company.”

The three productions will be in repertoire at the Theatre Royal, Nottingham from Wednesday 26 February – Saturday 7 March 2020

‘To whom should I complain?’

When a young novice nun is compromised by a corrupt official, who offers to save her brother from execution in return for sex, she has no idea where to turn for help. When she threatens to expose him, he tells her that no one would believe her.

Shakespeare wrote this play in [...]

Come into the forest; dare to change your state of mind.

Rosalind is banished, wrestling with her heart and her head. With her cousin by her side, she journeys to a world of exile where barriers are broken down and all can discover their deeper selves.

The Taming Of the Shrew

In a reimagined 1590, England is a matriarchy.

Baptista Minola is seeking to sell off her son Katherine to the highest bidder. Cue an explosive battle of the sexes in this electrically charged love story.

Justin Audibert turns Shakespeare’s fierce, energetic comedy of gender and materialism on its head to off [...]