Nottingham’s festival of music and the moving image returns with a thrilling line-up of events across the city! Celebrating film, gaming and video art, this partnership project brings together some of the city’s most popular creative venues including Broadway Cinema, Nottingham Lakeside Arts, Metronome, the National Videogame Museum and New Art Exchange.

This March, Nottingham will come alive with the sounds of flaming dragons, Bollywood fairy tales, fearsome creatures and femme fatales on the run, as Sound Stage Festival returns to venues across the city.

Supported by Arts Council England, Sound Stage Festival runs from Monday 11 to Sunday 17 March, giving audiences across the city a chance to immerse themselves in the soundtracks that bring the fantastic worlds of film, TV and videogames to life.

Highlights will include a blockbuster evening of fantasy film, TV and gaming scores from the world renowned Hallé Orchestra, BBC film critic Mark Kermode performing with rockabilly band The Dodge Brothers, film screenings with live accompaniment, free fringe events, and participatory activities, including the opportunity for families to create a new film score for a classic silent film with musicians from the BBC Philharmonic. 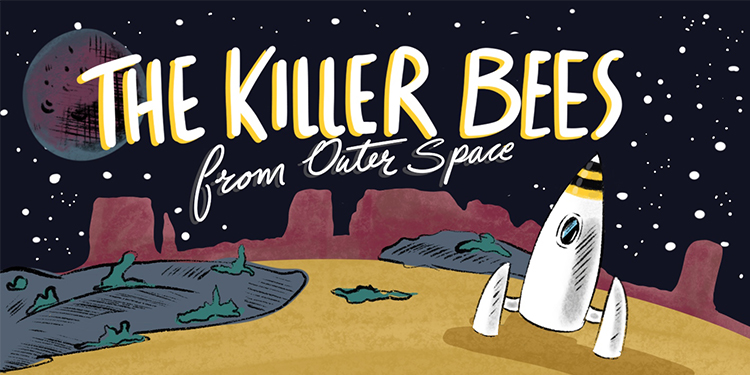 Moon Boogie with The Killer Bees

A unique twist on a collection of Sci-Fi favourites. With classic soundtracks such as The War of the Worlds, Back to the Future, Flash Gordon, Star Wars and many more, get ready for costumes and audience participation! 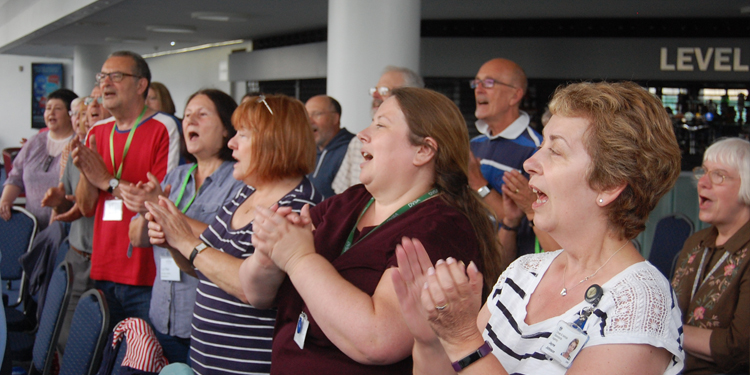 Make it a more musical lunchtime with this fun singalong of Disney favourites joining our Lunchtime Voices choir. This drop-in session is open to both seasoned singers and first-timers. 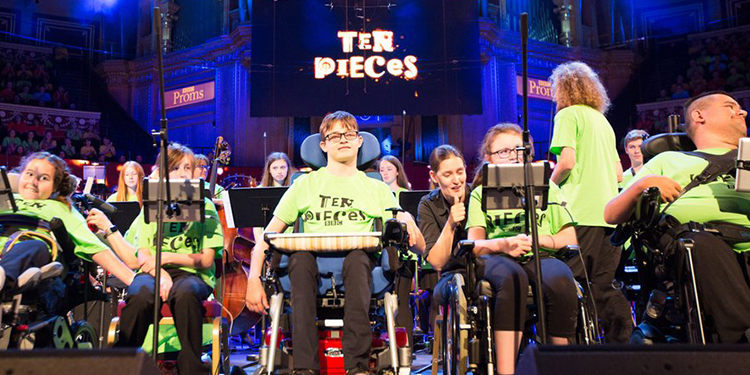 Able Orchestra is an inspiring ensemble which brings together disabled young musicians with members of the Halle Orchestra and Portland Academy to create new compositions using laptops. 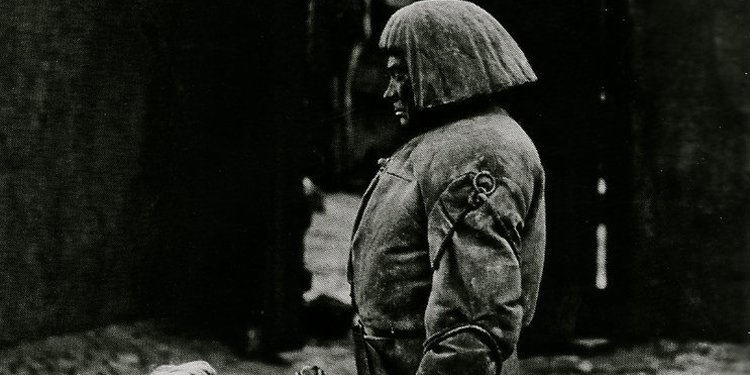 The 1920 silent horror film Der Golem was inspired by the fantasy figure of the Golem in Jewish legend. Saxophonist and composer Jan Kopinski with pianist Steve Iliffe provide moving, dramatic and achingly beautiful live music for this special screening. 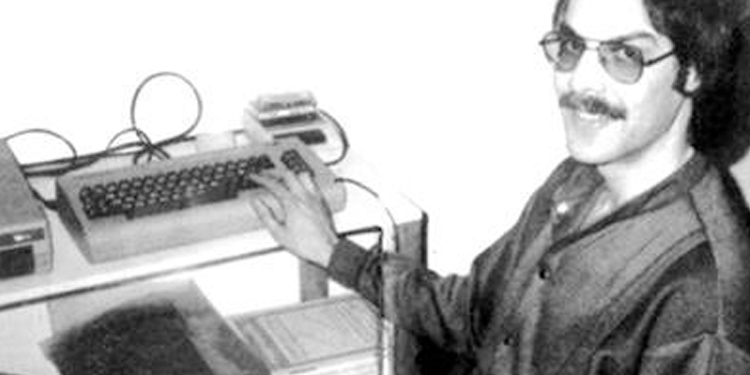 Videogaming’s favourite night out returns to Metronome with a Soundstage musical twist. In amongst the feisty audience participation, there’s a host of exciting game music activities for you – and some super-special musical guests including the legendary Rob Hubbard. plus, the house Band. 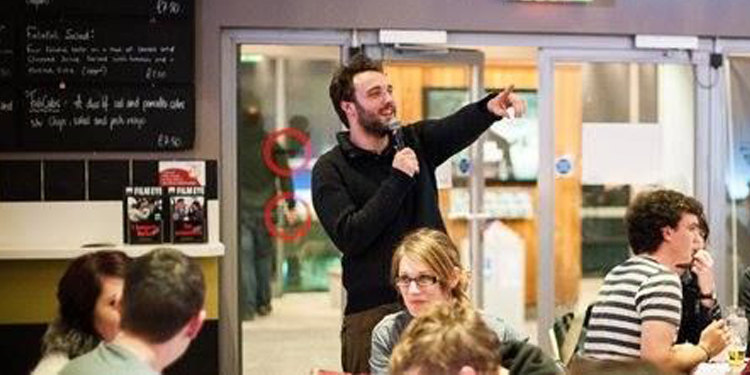 Do you know your Howard Shore from your Hans Zimmer? Gather your fellowship, venture forth and test your movie music knowledge in this wide-ranging quiz exploring great fantasy films and games. 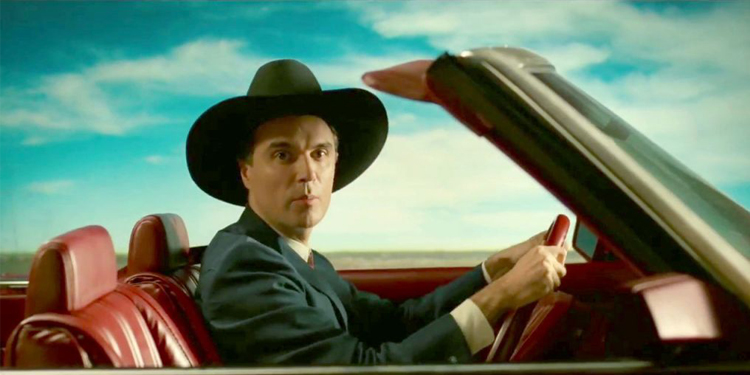 Starring director David Byrne, this is a quirky take on small-town America, set in the folksy, fictional Texas town of Virgil with a singing weekend cowboy, a bedridden millionaire, a voodoo faith healer and an over-the-top preacher. 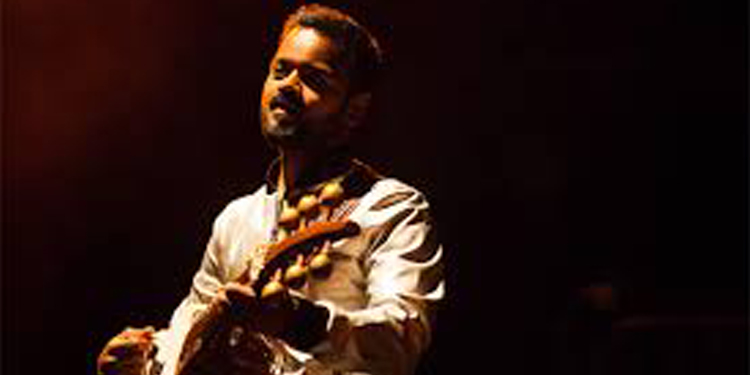 Immerse yourself in an atmospheric Indian soundscape as Soumik Datta and the City of London Sinfonia perform a vibrant double bill of music for Indian film, with live screenings of two films; 'Goopy Gyne Bagha Byne' and 'Around India with a Movie Camera' 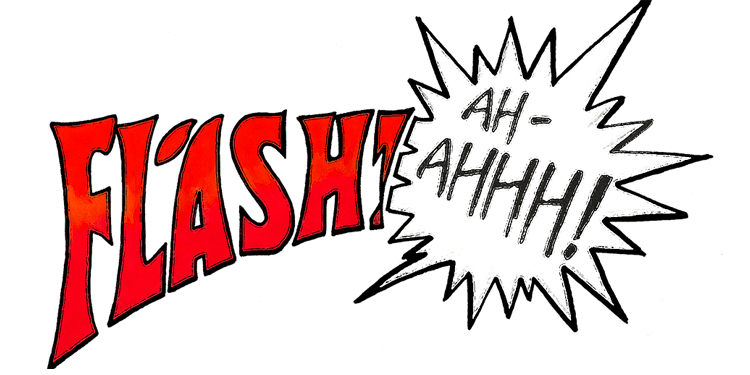 Strap on those shiny space boots and whisk yourself to Jam Cafe for an intergalactic boogie with a galaxy hopping spread of DJs and other wordly music to send you to outer space. Orcs, Space Raiders, Wizards and Wookies are all welcome here! 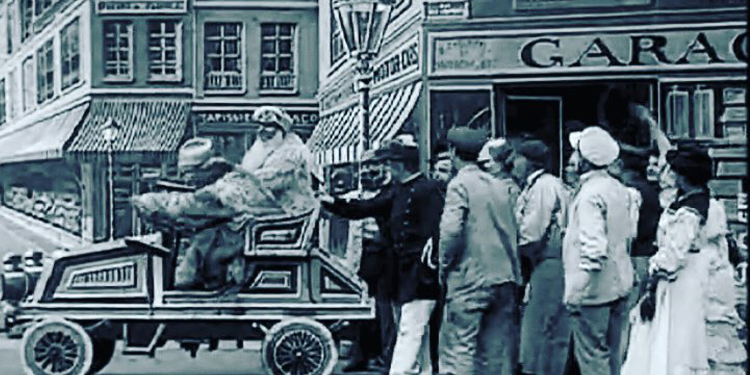 Ever wanted to create your own soundtrack? Sign up to the Nottinghamshire Family Orchestra & Chorus and join BBC Philharmonic musicians for a special performance. Together you’ll create a new soundtrack to Georges Méliès’ 1905 silent film, An Adventurous Automobile Trip. The piece will be created in just one day at Metronome, on 9 March, and performed on 16 March. To take part and join the Family Orchestra you just need to bring at least one other family member with you. It’s open to all instrumentalists and singers and it’s free! Sign up by clicking on the image above. 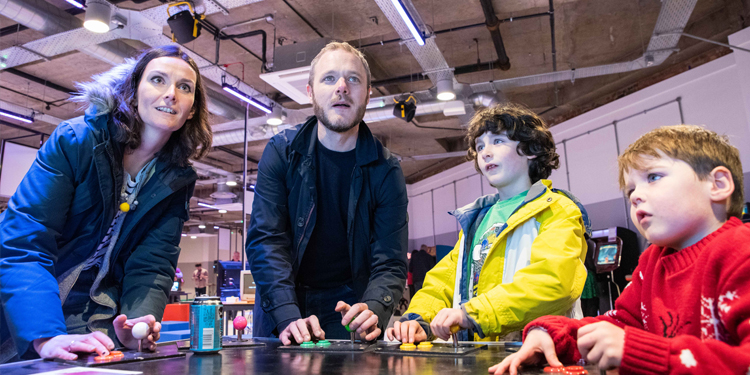 You've played the games, you've heard the theme tunes, but do you dream of composing your very own videogame music? Now you can with the National Videogame Museum. Bring your superstar DJ dreams to life and be inspired by our expert composers and musicians.
1.30pm-4pm Drop-in activities (no need to book)
2pm-3pm 'Become an Algoraver' workshop
3pm-4pm 'Join the Electronic Orchestra' workshop 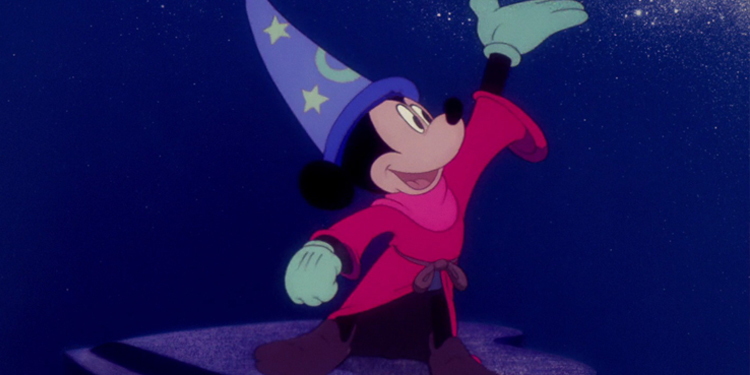 Still one of Disney's greatest achievements, Fantasia is a magical series of eight animated shorts inspired by classical music performed by the Philadelphia Orchestra, journeying unforgettably through the tunes of Tchaikovsky, Stravinsky, Beethoven and more. Includes a pre-movie introduction from Neil Bennison. 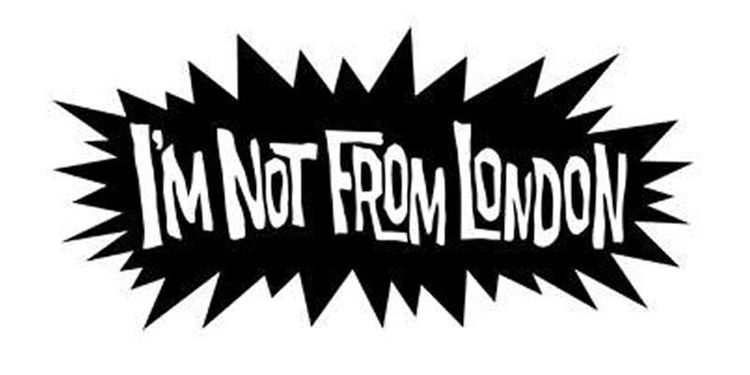 I'm Not From London Presents: Lost In Space

Luna Rosa, Moon, Revenge of Calculon and Idle Nova will supply sounds of the cosmos whilst Ignite Future will provide family-friendly scientific fun, games and experiments. Plus B Movies and intergalactic DJ's spinning weird and wonderful sounds way part bedtime! 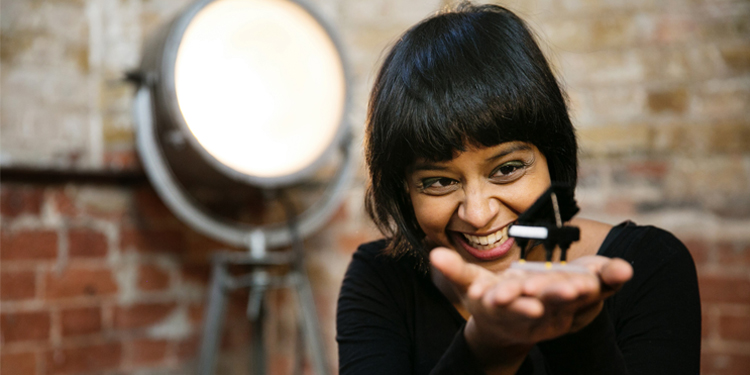 Blake 'Protodome' Troise performs classic video game arrangements with the aid of a Nintendo Game Boy, whilst Yshani Perinppanayagam brings pianistic brilliance to Zelda's Lullaby, Shadow of the Colossus and variations of the Tetris theme. 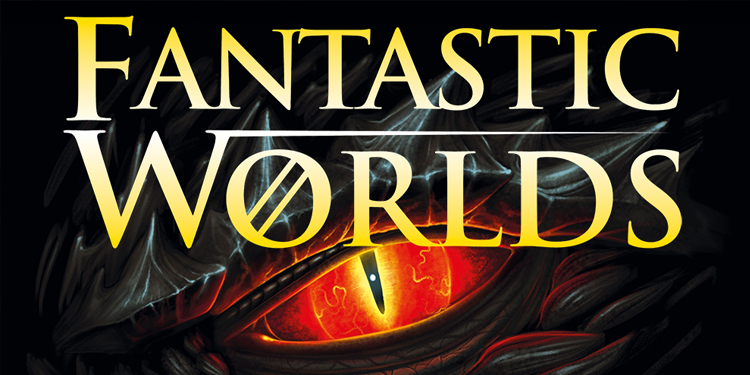 Join the world-renowned Halle Orchestra on a musical journey to extraordinary worlds. This spectacular programme includes music from Game of Thrones, Final Fantasy, Lord Of The Rings, HArry Potter, Planet of the Apes, X-Men and many more.
Free pre-concert talk with conductor Stephen Bell at 6.30pm 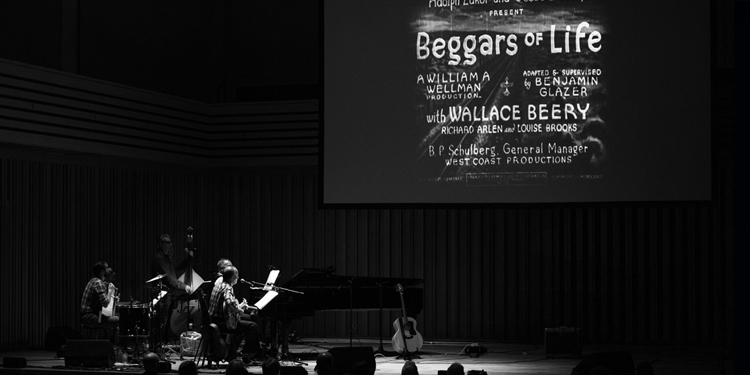 The Dodge Brothers: Beggars of Life

This roller-coaster of a silent movie will be underscored by a live soundtrack composed and performed by skiffle/bluegrass combo The Dodge Brothers, featuring silent film pianist Neil Brand and BBC Film critic Mark Kermode on double bass. 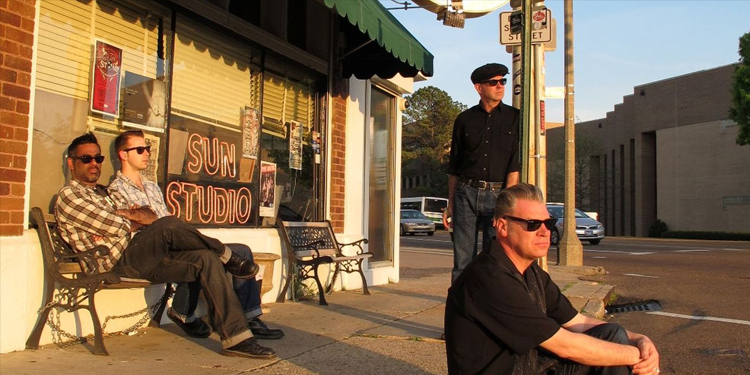 Every good festival should end with a party! After a short set by Mark Kermode, join skiffle and blues band The Dodge Brothers at Metronome for an upbeat gig with an authentically American tang.